Nicky Spence is the Guest Artist in Residency 2022 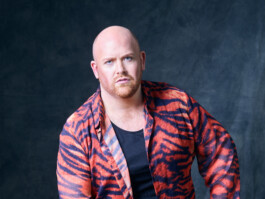 This summer you can look forward to experiencing operatic sincerity, poetic empathy and superior vocal power, when the inspirational Scottish tenor, Nicky Spence, lands in Copenhagen as Guest Artist in Residence.

Nicky Spence is one of the opera world's most exciting tenor voices. He recently made his debut as Siegmund in Wagner's The Valkyrie at the English National Opera and specializes in heroic roles, notably with Strauss, Janáček and Wagner. His magnificent voice and captivating performances have filled the halls of major opera houses in Britain and Europe. The Times newspaper aptly described him as "a tenor who can combine the heroic with a captivating poetic sensibility".

In the near future, Nicky Spence's calendar is filled with roles such as Samson in Samson and Delilah at the Royal Opera House in Covent Garden; Erik in The Flying Dutchman with Welsh bass baritone Bryn Terfel in Grange Park, as well as the role of Albert Gregor in The Makropulos Affair at the Washington National Opera. And now, Copenhagen opera lovers also get the pleasure of Nicky Spence during the festival, which takes place from 19 to 27 August.

"I am absolutely delighted to welcome tenor Nicky Spence as our Guest Artist in Residence at the 2022 Copenhagen Opera Festival.” says Festival Director and Artistic Director Amy Lane.

She continues: “Opera is the perfect alchemy of music, drama and storytelling and Nicky is an Artist whose heroic and passionate tones, all-engaging charisma and utterly compelling performances make me proud to be an Opera producer and director.”

When Nicky Spence follows in her footsteps as Guest Artist in Residence 2022, there will also be a wealth of experiences to look forward to. The Scottish tenor looks forward to presenting a Shakespeare-inspired concert at Børsen in close collaboration with pianist Dylan Perez. He also presents vocal masterclasses for six rising Scandinavian opera talents. The process will culminate in a final Vocal Masterclass Singers Concert on our own festival stage at Den Røde Plads, where Nicky Spence will also take the stage presenting several majestic arias, alongside his six opera apprentices.

“I’m thrilled to be the guest artist in residence at the 2022 Copenhagen Opera Festival. I’m such a huge fan of everything this special celebration of opera represents and to be able to contribute to that with my husband, pianist Dylan Perez, is a real honour for us both." says Nicky Spence.

During his visit to Denmark, Nicky Spence will be inspired by William Shakespeare. This will be expressed in a most noble way, in his concert at Børsen on 19 August, where a rich selection of musical Midsummer Night's Dreams, will fill the mild August evening.

In recital, Nicky Spence and pianist Dylan Perez will present a personal selection that evokes some of Shakespeare's most magical and dreamy scenarios through works by Schubert, Quilter, Tippett, Britten, Poulenc and Dankworth.

With his effervescent and vibrant playing, pianist Dylan Perez will help raise the summer evening to Shakespearean heights. The concert takes place in Copenhagen's historic building Børsen – an outstanding piece of architecture from the Baroque, which was built in William Shakespeare's own time. The festival's opening night thus offers a unique opportunity to experience the art of masterful opera, in the perfect historical setting. 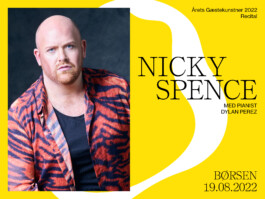