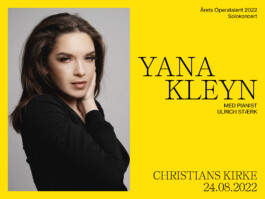 Experience the full range of the voice of the Opera Talent of the Year when soprano Yana Kleyn presents personally selected repertoire with arias by  Puccini, Tchaikovsky, Peter Heise and Schubert.

Yana Kleyn is educated from the soloist class at the Danish National Academy of Music. She made her debut as a soloist in 2011 and has subsequently made a name for herself with a number of great performances both at home and abroad. Yana Kleyn has also been part of Copenhagen Opera Festival's program, where in 2019 she performed in the festival's production of La Bohème, in 2020 she sang as part of the concert series 100 Opera moments, while in 2021 she was one of the three soloists in the magnificent opening concert Viva Verismo! in both the TIVOLI Concert Hall and on the Festival Stage at Den Røde Plads.

Her voice has previously been described as broad, creamy, dark and large. The voice will be fully demonstrated in the most beautiful way at this concert, which is her first solo concert at the Copenhagen Opera Festival.

At the piano, you will find the ever inspiring and engaging pianist, Ulrich Stærk. The last time the two played together at the Copenhagen Opera Festival was in the festival's production of La Bohème at Østre Gasværk Teater. Here, Yana Kleyn had the role of Mimi, while Ulrich Stærk was conductor and pianist.

Read more about Yana Kleyn, as the Opera Talent of the Year 2022 here.
Follow the event on Facebook here.

Here you can have a taste of Yana Kleyns voice from the opening concert Viva Verismo! with TIVOLI Copenhagen Phil at the Copenhagen Opera Festival 2021. The Concert begins at 00:41:50 and at 01:14:00 you can hear Yana Kleyn sing Senza Mamma from Puccini's Suor Angelica (Il Trittico).