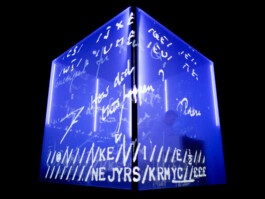 Artificial intelligence, Nazi resistance and the fight against brutal suppression of sexual minorities. The mathematician Alan Turing’s life is a tragic and captivating story of love, pain, secrets and breaking scientific ground.

"The life of the pioneer, Alan Turing, has been captured in a newly written opera, which will be performed at the theatre Sort/Hvid.  Cross-disciplinary artist, counter-tenor Albert Montañez, has written the libretto and sings the title role of Alan Turing.

The performance combines opera, theater, computer-generated music and technological elements in its portrayal of a human being who was way ahead of his time. It was performed for the first time during Halland Opera & Vocal Festival in 2020.

“Alan Turing's tragic death needed to be told from an opera perspective as it is the perfect opera story,” says Albert Montañez about the mathematician and the LGBTQ+ icon, who was portrayed in 2014 by the actor Benedict Cumberbatch in the film ’The Imitation Game’.

Turing was found dead at the age of 41 in 1954 - according to some theories, after having eaten an apple, poisoned with cyanide. The performance lasts for one hour and depicts the last hours of his life.

With his searing intelligence, Alan Turing is known as one of the founding fathers of the modern computer. He broke the code machine of Nazi Germany during the Second World War saving millions of lives. Before his death, he was taken to court for being actively homosexual and was pressured into subjecting himself to chemical castration. Today, he has become an icon for LGBTQ+ rights.

The performance challenges the encounter between the creative power of man on one side and artificial intelligence on the other. Parts of the musical score are computer-generated and performed together with Albert Montañez’ searing counter-tenor solos. The score of the opera is composed by Swedish composer, Kent Olofsson.

”We have tried to recreate Alan Turing's idea of thinking machines,” says Kent Olofsson. ”Hopefully, this will bring the audience very close to the last hours of Alan Turing's life.”

After the performance on Thursday the 25th of August you can attend a talk and insight with the creative team behind the opera ‘Alan Turing’.

‘Alan Turing’ is a collaboration between Copenhagen Opera Festival and Sort/Hvid.