How would the opera genre have developed if all of Monteverdi's opera works had been preserved?

The Italian composer and so-called "ancestor" of the opera genre, Claudio Monteverdi (1567-1643) wrote up to 15 opera works, but only the three famous works "Orfeo", "Ulisses" and "Poppea" are preserved.

In the trilogy Die Oper # 1-3, the German experimental opera company NOVOFLOT examines how the opera genre could have looked and sounded if several of Monteverdi's original operas had been preserved. They look back on the birth of the opera over 400 years ago and on the ancestor, Claudio Monteverdi, as they celebrate with Die Oper # 1– # 3 the imaginary rediscovery of the lost operas.

Based on the three famous works by Monteverdi, NOVOFLOT fills in the gaps one by one and rethinks how the genre could have developed if other of Monteverdi's works had left a strong mark on opera history.

It all starts here: 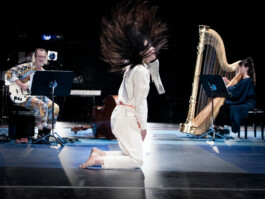