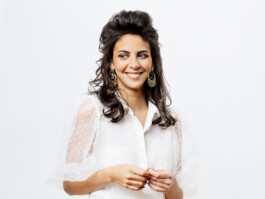 The great stages are not exactly overrun with Egyptian Opera singer – but the soprano Fatma Said can proudly take the claim of being the first Egyptian singer to ever sing at the prestigious La Scala, Milan.

Fatma Said has an extensive repertoire featuring both opera, Broadway musicals, jazz and songs in various languages. In recent years, she has had opera audiences all over the world delighting at her clear and magnificent soprano voice – and she has an exclusive record deal with Warner Classics.

Together with the Scottish pianist Malcolm Martineau – one of the world’s most sought after accompanists – Fatma Said takes us on a trip to France and Spain with a string of songs by Ravel, Bizet and de Falla, among others. It will even be possible to hear the famous Spanish dramatist and author Federico García Lorca as composer - and of course also musical greetings from Fatma Said's native country.

Federico García Lorca is best known as a poet and dramatist, but he was actually absorbed in music all his life. He originally wanted to be a pianist and wrote several compositions himself. Lorca was friends with the composer Manuel de Falla, to whom he was introduced as a very young poet when Falla visited Granada in 1919. Falla settled down in García’s hometown the following year, and from then on, the two of them worked together on many projects - Fatma Said and Malcolm Martineau perform three of Lorca’s and one of de Falla’s songs at the concert in Glassalen. They also have a song by yet another Spanish composer from the first half of the 20th century in the form of Fernando Obradors’ Del cabello más sutil.

The French composers Georges Bizet and Maurice Ravel are also on the programme; Ravel with his Cinq mélodies populaires grecques – five popular Greek melodies – initiated in 1904 upon urgent request from music researcher Pierre Aubry, who needed music examples for a lecture on Greek folksong. A mutual friend of his and Ravel found five selected examples, and Ravel delivered a piano accompaniment for them in just 36 hours. Fatma Said demonstrates that Bizet had other talents besides composing Carmen, when she sings his ”Goodbye to the Arabic hostess”.  Arabia is represented by Fatma Said's fellow countryman, the composer Gamal Abdel-Rahim, who was one of the pioneers within classical music in the Arabic world in the mid-20th century … and thus one of those who paved the way for an Egyptian soprano to become world famous – and who can now be seen in Glassalen in Tivoli.

The concert is a collaboration between Tivoli Copenhagen Phil and Copenhagen Opera Festival.

The concert is a collaboration between Tivoli Copenhagen Phil and Copenhagen Opera Festival.