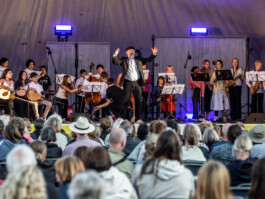 There will be colourful fireworks of diversity when the choir and orchestra from Goldschmidt's Music Academy take us on a world tour.

There are no wrong tones but rather lots of music which bubbles over with cheerfulness, acceptance and freedom. It will be a concert where children, young people and adults can explore the music with no performance pressure.

The Academy's choir will spellbind the audience with songs from all over the world, when they are accompanied by Bilal Irshed’s Middle East orchestra, and soloists from the school perform. Fuat Talay presents his Golden sazes when the biggest Nordic orchestra plays Turkish and Middle Eastern melodies on the traditional stringed instrument.

It all ends with a festive carnival when Goldschmidt's Music Academy play their very own Gold Samba.

Goldschmidt's Music Academy was founded by Henrik Goldschmidt in 2011, and since then, they have provided free musical training for children and young people between the ages of 7-18 who have no other ways of meeting music. In addition to the training itself, the goal for the school is to support the students’ personal development and life mastery, increasing their daily well-being and breaking down hatred and prejudice.

The concert is presented in collaboration with ALICE.