Saz, Beethoven and carnival! Get ready for musical fireworks, when Goldschmidt’s Music Academy’s choirs and orchestras takes us on a journey around the Globe.

Goldschmidt’s Music Academy presents a musical firework of diversity and joy, when the school’s orchestras fills the Festival Stage and Den Røde Plads with music. The academy’s choir, led by Egyptian singer Fatma Zidan, enchants the audience with songs from all over the world accompanied by Bilal Irsheds Middle East orchestra. The Northern biggest saz orchestra will afterward play Turkish and Middle Eastern melodies, when Fuat Talay presents the Golden sazes. In the end the academy’s symphony orchestra, conducted by Anne Marie Kjærulff og Torbjørn Eika, will perform Shostakovich and Beethoven. It all ends with a big carnival, when Goldschmidt’s Music Academy plays their Gold Samba.

Goldschmidt’s Music Academy is founded by Henrik Goldschmidt in 2011 and has the last ten years given free music education to children that doesn’t have the possibility to learn music due to either financial or/and social reasons. The goal is to support the children’s personal development, to contribute to the overall well-fare of the children, to break down hatred and prejudices and to give them a better life mastering. 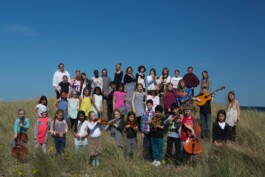