Do you miss opera? We do! Therefore, we are very pleased that several opera houses have made it possible to stream some of their biggest and best opera productions. The programs change constantly, but here's a list of where you can find your next opera streaming experience. Enjoy.

'The Turn of the Screw' at Marquee TV

Marquee TV is a great platform where they have tried to bring together some of the world's best in dance, opera, theater and concerts. They have mixed content from the Royal Opera House, Royal Ballet, Teatro Real, Royal Shakespeare Company, Opera Zurich, London Philharmonic Orchestra and more. But the main reason why we are mentioning Marquee TV here is 'The Turn of the Screw'.

Why 'The Turn of the Screw'?

OperaGlass Works were about to open with a stage production of Britten’s The Turn of the Screw in London when England had to go into lockdown. Instead of boxing up, going dark and wait for a reopening, the creators allow the show to react to the situation. With Marquee TV they turned the entire opera into a film, shot in oldest surviving music hall, Wilton's Music Hall. And we think it looks very beautiful.

Here Eliza Thompson, Producer at OperaGlass Works, shares the story of how they adapted in the face of a nationwide lockdown.

Yes, it does require a subscription to Marquee TV, which is 7 GBP a month, but you get a 7-day trial. 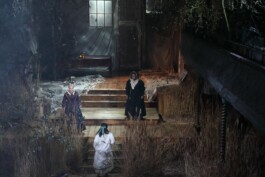 'The Turn of the Screw' is created by OperaGlass Works and co-commissioned by Marquee TV. Foto: Laurie Sparham

The Metropolitan Opera is placed in the heart of New York City on Broadway in the Lincoln Center. From here, they show over 200 performances during the season, but this year they have naturally invested a lot in adding digital initiatives to their productions. Among other things, they have built the app 'Met Opera on Demand', from which you can easily stream – and then they have 'Nightly Met Opera Streams'.

What is 'Nightly Met Opera Streams'?
It's a free nightly stream of opera and concerts. All Nightly Met Opera Streams begin at 7:30pm and remain available via metopera.org for 23 hours – and are also accessible on all Met Opera on Demand apps. Each week has a theme, such as anti-heroes – or the celebration of 'Black History Month', as seen in the first two weeks of February. Here you can watch operas featuring fantastisk black singers from the last 50 years.

Is there anything you can highlight from 'Black History Month at the Met' programme?
Absolutely! Be ready on February 1st for The Gershwin's' 'Porgy and Bess', on February 5th for Mozart's 'Le Nozze di Figaro', on February 8th for Wagner's 'Das Rheingold' and again on February 14th for Wagner's ' Die Walkure '. As I said, they are all shown at 7.30pm GMT-5, but can be streamed for the following 23 hours.

All Nightly Met Opera Streams are free, while it costs 14,99$ a month to access Met Opera on Demand after the 7-day free trial. You can read more about that here. 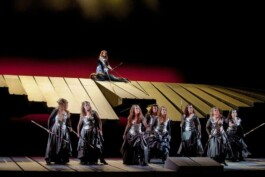 What can you watch?

They stream a new show everyday. Mostly the streams starts at 19.00, but sometimes they also livestream from the Wiener Staatsoper. The program is published 5 days in advance, so it's worth keeping an eye on it.

It's free, but you have to register. It was a little hard to find there, so here is a direct link.

The Royal Opera House has been in Covent Garden for decades where they have been producing and performing streaks of beautiful operas. They share the house with the ballet, and therefore you can find both opera, ballet and concerts on their streaming site.

Where should I begin?

Until the 7th of February 2021 you can stream Umberto Giordano's opera 'Andrea Chénier'. The opera is based on events from the real life of the French poet André Chénier – and his tragic death. André Chénier was executed during the French Revolution and in this spectacular and almost cinematic set-up by David McVicar we are brought back to the end of the 18th centuries Paris with beautiful and historically looks and costumes.

Here on Facebook you can get an introduction to the performance of the team behind it. 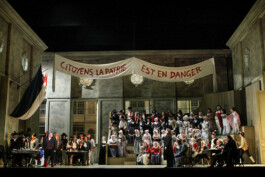 The Royal Danish Opera has created KGL Xtra. Here you can find many beautiful opera productions that can help us all through this winter. You will also be able to find concerts, ballet and some plays, articles and background material. And a full page for kids filled with tutorials on how to make crusader costumes, you can sing with The PixiOpera's Papageno and Papagena, learn the five ballet positions and much more.

Incredibly, it's completely free. However, you can only stream to Denmark, Greenland and the Faroe Islands.

A place to start is Richard Strauss' elegant opera 'Der Rosenkavalier', where satire, comedy, romance and melancholy meet in this bittersweet tale of the course of life. Here it can be experienced in the Reumert-awardwinning staging from 2008 by Swiss Marco Arturo Marellis, where giant mirrors illuminates and reflect the stage floor and all the action. 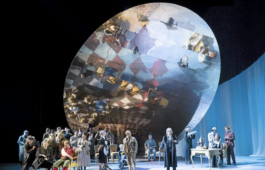 Stream 'The Marriage of Figaro'

Opera Hedeland does not have a lot of streams available. But they have one really nice condensed edition of Mozart's 'The Marriage of Figaro'. The opera takes only one hour and is performed in Danish with Danish lyrics by a team of wonderful singers.

It's completely free to stream 'The Marriage of Figaro', and you can find it on both YouTube, Vimeo and Facebook, from where you easily can stream it to your television.

What else is good to know?

They have made learning materials, so if you miss inspiration for home schooling (in danish), then here is a helping hand.

You can find the TLM at the bottom of this page 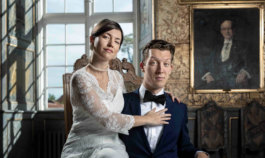 'The Marriage of Susanna and Figaro' at Opera Hedeland. Photo: Mikal Schlosser at Roskilde Kloster.