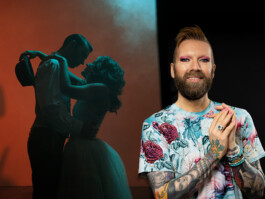 Romeo and Juliette - the most beautiful and sad love story of all! Malmö Opera crosses the water and visits the Festival Stage with a concert version of highlights from Charles Gounod’s opera, about the young lovers who are torn apart by the conflict that rages between their families.

Patrik Ringborg is one of Sweden's most internationally sought-after conductors. He has worked at the Semper Opera in Dresden, Deutsche Oper Berlin, Deutsches Nationaltheater Weimar, Volksoperen in Vienna and The Norwegian Opera. In 2022, he was appointed the first guest conductor at Malmø Opera. During the season 22/23, he performs Roméo et Juliette, which will be directed by our Festival Director, Amy Lane and Fallet Makropulos.

Kseniia Proshina sings Juliette was trained in Italy and Russia, and since 2019 she has been a member of the ensemble at Paris National Opera.  In 2020, she won the Grand Prix at the international Gianluca Campochiaro competition. During her time in Paris, she has participated in the Marriage of Figaro, the Coronation of Poppea and Parsifal.

Sehoon Moon sings Roméo graduated from Dankook University in Seoul in 2011 and then joined the Theatre Academy at La Scala in Milan. His roles include the British delegate in the world premiere of Giorgio Battistelli’s CO2 at La Scala and Ernesto in Don Pasquale at the Glyndebourne Festival. At Malmø Opera, he has previously sung Alfredo in La traviata and Fenton in Falstaff.